Your new home adventure...another reason to love this summer

If you register on the Miller Homes website or app you’ll be entered into our May prize draw to win a £50 M&S food voucher^. Register for updates today.

The perfect place to begin a new adventure. Find out more

Our development sales centre and show homes are open to visit and you can call or book an appointment online. Telephone or video appointments are available too. You can also reserve your new home online. We look forward to welcoming you soon.

On the north-western edge of Derby, close to open countryside but with easy access to the lively and varied shopping and leisure attractions of the city centre. Hackwood Park is a fantastic selection of two, three, four and five bedroom homes in Mickleover, Derby.

Book your appointment to visit us or reserve your dream new home online today. We look forward to welcoming you soon at Hackwood Park.
View all home offers View development gallery 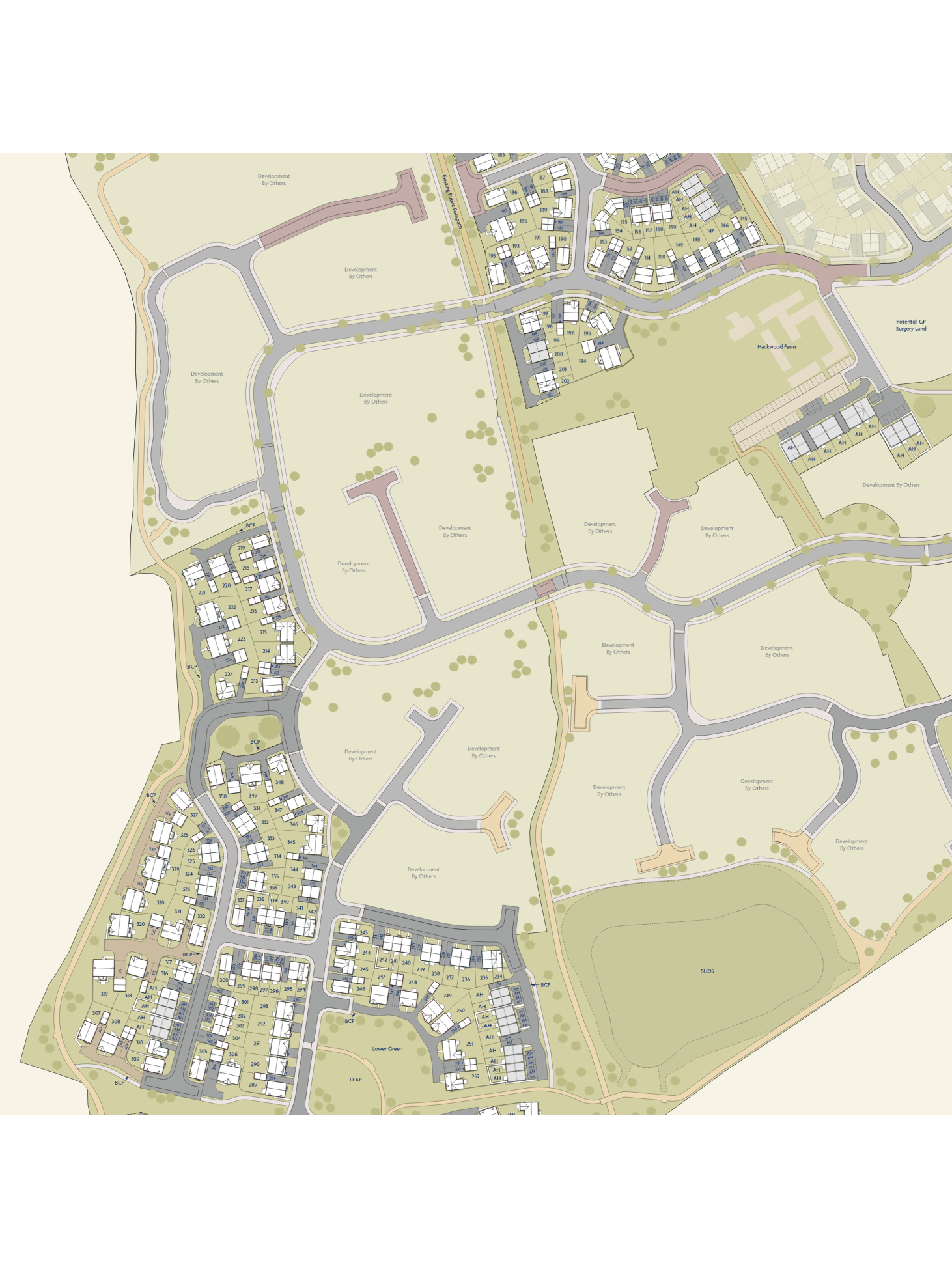 Price and availability correct as of 28/05/2022 at 22:54. A management fee may apply, this is plot specific. All details should be checked with our sales team and confirmed with solicitors. Energy ratings are estimates based upon the predicted energy assessment from the SAP calculations at the design stage.

Hackwood Park is approximately three and a half miles from the centre of Derby, with its excellent shops, vibrant nightlife and cosmopolitan theatres, cinemas, music and sporting venues, and other cultural attractions.

The area is linked to the city centre by a local bus service that operates every 20 minutes. By rail, Derby is 45 minutes from Birmingham and less than three hours from London St Pancras, and the 25 mile long National Cycle Route 54, which passes through Derby city centre and extends to Little Eaton in the north, runs along the southern edge of the development.

There are a number of small local shopping areas nearby, including a convenience store on Ladybank Road and a small precinct around Devonshire Drive with another convenience store, a pharmacy and a post office. A second selection of shops, a little further away around Station Road, widens the choice with banks, food takeaways, hairdressers, pubs and other services, alongside Sainsbury Local and Tesco supermarkets. The large Kingsway Retail Park, around two miles away, includes Marks and Spencers, Next, Boots and other high street stores, and is adjacent to a Sainsbury supermarket and a Currys PC World store that offers recycling services for electrical items.

The beautiful green expanse of Markeaton Park, two miles away, is one of the Midlands’ most popular attractions. With a café, a dog-free play area with a paddling pool and fountains, crazy golf, cycling and other sports amenities, it is also a popular place to just stroll and relax. For golfers, Mickleover Golf Club and the Pastures Golf Club are both nearby, and other leisure amenities in the area include a football academy at Mickleover Sports Club, ten minutes walk away, and Lonsdale Swimming Pool.

What our customers have to say...

“Anyone can build a lovely house, the difference with Miller Homes is the polite, helpful and friendly people we’ve dealt with.”

We dealt with Tracey from the sales team and really appreciated her personal touch. We had a lot of questions around what went on in the background with things like solicitors and what was the best deal in terms of mortgages but she sorted everything out.  There was a financial advisor based in the office and Miller Homes even recommended a solicitor so we didn’t have to think about that.  The friendly sales team went through all the options for the house. They showed us how it could be customised and they were honest about what couldn’t be changed, which was good so there were no surprises. We felt really safe with Miller Homes, that’s important when you are making such a large purchase.

“We knew we were buying from a company that really cared about their customers having a good deal and a great experience.”

The team took a lot of care in helping us to find our home and so when we walked in, it felt like ours from day one.  We told them our price range and the sort of property we were looking for and they showed us all the plots available.  We purchased off plan and the one we chose looked amazing.  The team discussed the environment around it which helped us to imagine and visualise it really well.  They showed us what to consider, even down to little things like where the sun would set and they went into a lot of helpful details that we didn’t expect to get.  They genuinely went out of their way to help at every stage of the journey and we knew that the house would be built with care. The guys on site are great too.

“We’ very proud of our home, it’s so nice and it feels like it was designed for people to really live in.”

Once we saw the design and layout we could see ourselves living in it and starting our new family.  It’s a very spacious 3 bedroom detached house with a nice big hall, a good size kitchen/diner and a lounge.  As well as shops, there’s going to be a primary school on the doorstep which will be very important for us.  We also love the amount of green space around and we look out onto a little stream at the front of our house.  The location is ideal too, if you go one way there’s the city centre and then there’s the Peak District in the other direction so it couldn’t be better.

…because our experience was incredible.  They took away as much stress as they could and we’d 100% recommend them for their homes and their personal touch.  We’d say to friends looking at Miller Homes to absolutely go for it, we’d tell them Miller Homes would be there every step of the way for them.

What our customers have to say...

“We were really impressed with the quality when we came to look at Miller Homes.”

We’d looked at different developers in the area, but the quality here seemed much better than other homes we’d seen. This is the third new-build home we’ve bought and although it’s been many years since we bought our first new-build, we can certainly see the standard is a lot higher. Our new home is going to be easy to manage and it’s got everything we were looking for.

“Hackwood Park is close to Mickleover and that’s a lovely place to live.”

This is a good location for us. It’s close to our family and on the edge of Mickleover. We can get into Ashbourne and Derby without any trouble and it’s also close to open countryside which we can get to easily by car.

“We’ve had a friendly service, and everyone has been very amenable in helping us.”

Miller Homes have been helpful to us throughout the move, beginning with helping us to sell our own house within six weeks. When a house is new one expects there to be a few things that aren’t quite right, but Neil on-site has been very good at dealing with these things; nothing has been too much trouble for him. He’s a credit to the company and has gone above and beyond, helping us with any issues.

...because of the excellent service they provided and the high standard of the build.

Hackwood Park is a great area.

We relocated here because the location was good. I have a wife and two children, so I love having some space in a quiet, rural area that’s easy to manage. A sense of community was something I was searching for; the neighbourhood is very nice (so it’s safe for the children) and there are parks and shops nearby, despite being out of the city centre. My family and I can go for walks without the hustle and bustle. Gardens and play areas will open soon, which I’m sure will make the development even better.

I’m very comfortable in my home.

The rooms are a good size, so the property feels spacious. It fitted with all my criteria and was reasonably priced.

The staff are very professional.

If there are snags, the Miller Homes people will be out as soon as possible to sort them quickly. John and Richard are both gentlemen; whenever we’ve needed anything, they’ve been there for us, as well as the ladies in customer service.

…because the value for money and post-sale service are both very good.

The perfect place to begin a new adventure.

Start your new adventure today at Hackwood Park and discover our beautiful range of 2, 3, 4 and 5 bedroom homes situated in Mickleover on the north-western edge of Derby.

Our new, energy efficient homes mean lower heating bills and reduced Co2 emissions^, which is great for the planet as well as your pocket. Plus, when you buy a brand-new Miller home, you’re buying an amazing blank canvas to add your own personal style to. Live your new adventure today.

Book an appointment Options Visualiser
Our sales centre and show homes remain open to visit with all necessary safety procedures in place. You can call, or book a telephone or face-to-face appointment online. You can also reserve your new home online.