Christmas Dinner: The Ultimate Rankings As Voted For By You 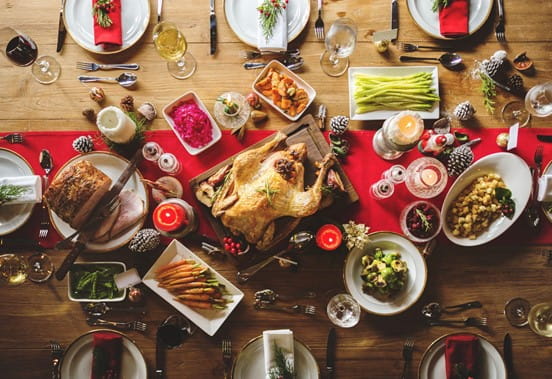 Christmas day is just around the corner. With the festivities comes family traditions, an annual viewing of Home Alone and of course, our plates piled high with the ultimate festive feast - Christmas dinner.

When it comes to the annual meal, most families opt for all the trimmings, but there’s often a few questions which divide us all. What’s the best part of Christmas lunch? Does the turkey take the trophy? Does cranberry sauce beat gravy? Are Brussels sprouts actually nice? And the undisputed question… do Yorkshire puddings actually belong on a Christmas dinner?

We’ve surveyed hundreds of you to reveal what Britons can’t wait to eat this December 25 - and what they’re likely to leave on their plate.

We asked our respondents to tick three Christmas trimmings that are their favourite, and the mighty roast potato took the top spot, with Britons most looking forward to eating the traditional, crunchy spud on the big day.

Pigs in blankets came close, outshining stuffing and Yorkshire puddings by a mile, adding fuel to the question: why do we only eat these delicious pork treats once per year?

One of the biggest surprises may be the ranking for Brussels sprouts as the top vegetable on your plate. Love them or hate them, the vegetable which resembles a miniature cabbage will always find its way onto your Christmas dinner. Narrowly beaten by stuffing, 32% of respondents don’t just like sprouts, but would rate them as one of the most important elements of the Christmas dinner, beating every other vegetable, such as parsnips, carrots and cauliflower (cheese).

Rogue choice: One person voted for Branston Pickle as their favourite trimming!

We also asked respondents to reveal their least favourite food item out of the most common foods we eat on our Christmas dinner, this time including the common meats and vegetarian alternatives.

Despite its ranking earlier, Brussels sprouts were still named as the least favourite element of a Christmas dinner. The controversial vegetable can be dressed up with balsamic, parmesan or bacon, but there’s no denying that the Christmas meal essential isn’t everyone’s favourite.

Nut roast and turkey, the main stars of most people’s Christmas dinners depending on their eating preferences, came second and third. Lamb also came fourth, with gammon ninth.

Rogue choice: Five people said they have no least favourites - they like it all!

Gravy dominated the list, with just under half of people opting for the sauce which adds extra moisture to potatoes, turkey, beef, pork, and vegetables.

Cranberry sauce, often eaten with turkey, bacon and cheese in the evening, came second, followed by bread sauce. Surprisingly, 1% of people have hot sauce with their Christmas dinner, and 0.5% of people have mayonnaise.

Rogue choice: 2% of people have barbecue sauce with their Christmas dinner, so although it’s a traditional meal it just shows that anything goes!

Whether you graze on a cheeseboard throughout the day or make your way through an entire tub of Quality Streets, dessert is a staple of Christmas Day. However, everyone has their own opinion on what makes the perfect dessert after a hearty Christmas dinner.

Christmas pudding topped the list, with almost 30% of people opting for the dessert which traditionally has brandy in it, and is set on fire before we eat it. Surprisingly (or unsurprisingly, given so few people voted for it), Christmas cake didn’t even make the top five.

Rogue choice: One person has an ice cream and a flake on Christmas day. Perhaps they’re hoping to recreate that warm feeling from summer?

The age old debate: Do Yorkshire puddings belong on a Christmas dinner?

This has been a source of tension for many years, with many people arguing that Yorkshire puddings only belong on a roast beef dinner, not with turkey. But, it turns out that over two thirds of respondents are happy to add more room for carbs and find space on their plate for the humble Yorkshire pudding.

That solves that, then.

Britons like their fizz with their Christmas dinner. Champagne topped the list, with 20% of Britons opting for the luxurious drink which is perfect for a party or occasion. For those that don’t want to splurge, prosecco came second, followed by red and white wine, which Britons seem to prefer equally.

3% of respondents have water with their Christmas dinner, while 6% have a non-alcoholic fizzy drink.

Rogue choice: 1% of people wash their turkey down with Baileys, the Irish cream liqueur which is often used to liven up desserts, not roast dinners.

So there you have it. Christmas Day dinner remains largely traditional but there’s still room to add some flavour of your own liking to the festive meal!

We surveyed 483 people to find out what their favourite parts of the Christmas dinner are.

For their favourite part of the Christmas dinner, we asked them to vote for their three favourite elements of the meal. For each other question they could click on one answer.

Where their preference was not available, they were able to specify their answer under ‘other’.